Without a solid media center software your HTPC wouldn’t be much more than a regular PC hooked up to your TV. If you are desperate you could resort to using Windows Media Center, but you HTPC could be so much more and it won’t cost you anything apart from a bit of time and perhaps an ounce of dedication. There are several great open source alternatives to Windows Media Center available and the one I finally decided on was XBMC Media Center. 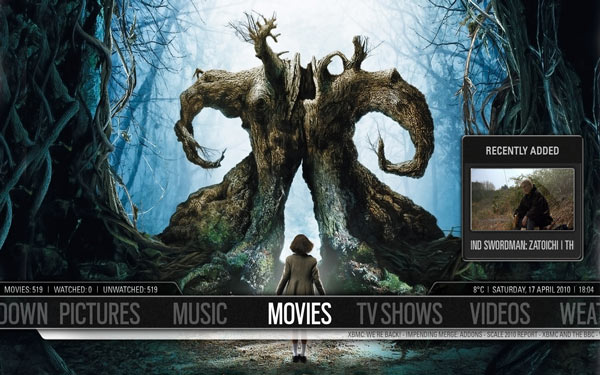 If you like your media then chances are you’ve run into a few different media players from Winamp to iTunes, Windows Media Player, VLC and Windows Media Center. XBMC media center is much more than just a media player it’s what you want a media center application to be. It’s free and it’s only getting better as more and more features are added to it with further development progressing rapidly.

I only discovered XBMC about a year ago when I was looking for an application to help me organise my digital media in an easy way and play it through a nice looking interface. I was getting fed up with having to resort to USB sticks to play a few files on a TV or DVD player with support for a limited amount of codecs and being forced to use interfaces that looked like they were designed by baboons. I was certain that there had to be something better out there. Armed with little more than a desire to find a better interface I started my search.  After a little while I came across something called the Aeon Project which immediately caught my attention. The interface was beyond anything I had seen before and I knew that this was what I had been looking for. 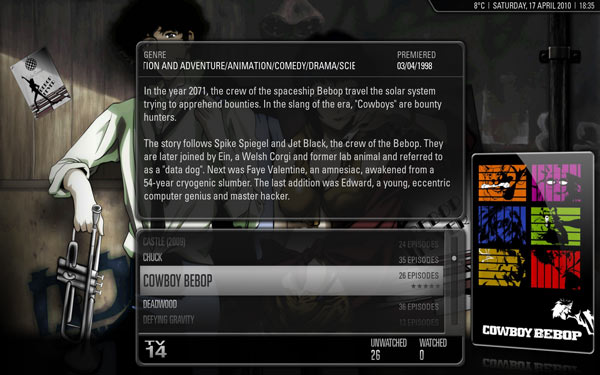 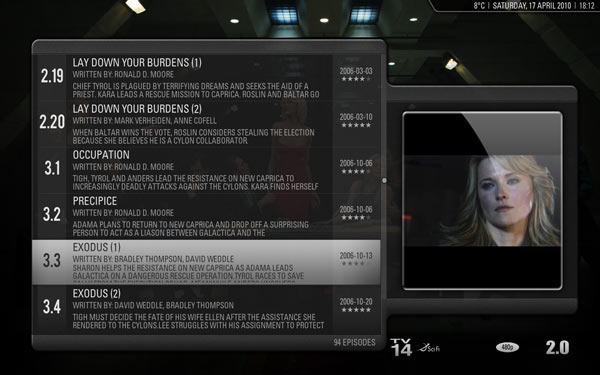 After XBMC initially opened my eyes to what was possible I spent months researching and testing various media center software packages and I have yet to find anything to rival XBMC Media Center. At the moment there’s not much that comes close, at least not on Windows.

So what exactly is XBMC Media Center?

It all started in 2003 when a group of programmers created an application to allow people to use their Xbox as a media center to play movies and other media, known at the time as Xbox Media Center. Over time XBMC grew far beyond its roots and is now a fully fledged cross platform open source software media player and entertainment hub for digital media. It’s completely free to use and has a very active community with loads of different skins available to suit any taste.

Support for multiple scrapers basically means that XBMC will scan any folders or files you add to your XBMC library, look at the file names and automatically find posters, fanart, synopsis, full official titles or episode names and more from various online sources like IMBd and TheTVDb. If you have a substantial media collection it will probably take a little while to scan and download all the media but it will be oh so pretty when it’s done.

The results of the scan and scraping will depend on how well your media is organised and named, but even with an unorganised collection the results are very impressive. 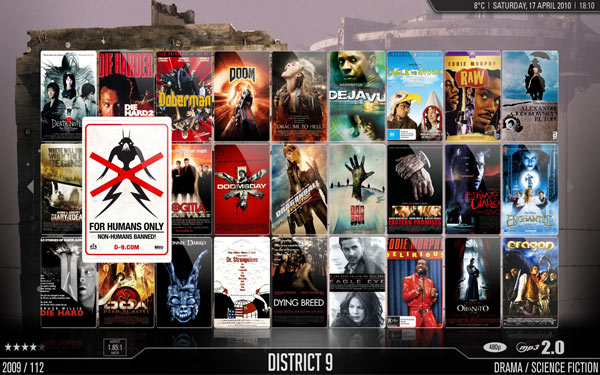 The UI for XBMC is incredibly customisable and in addition to the provided skins there are several awesome skins available to suit your own taste or even if you just want some variation from time to time. Some of my favourite skins available for XMBC are:

ShowMix is a further development of the original Aeon skin with a lot of additional features merged in from various other mods of the Aeon skin. It is probably one of the most customisable and feature packed Aeon based skin available. It almost has too many features and can sometimes feel a bit heavy and cluttered if with all the various layout options available. It will definitely have a layout option to please almost anybody and it looks awesome at 1080p. 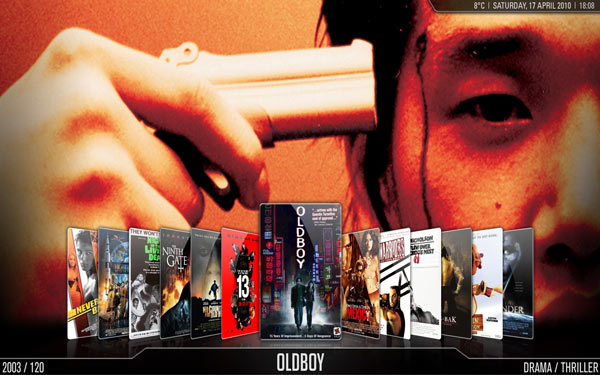 Initially started by the guy behind Aeon this skin focuses on a lighter based layout rather than the majority of darker based themese. It also tries to stay lightweight and quick. 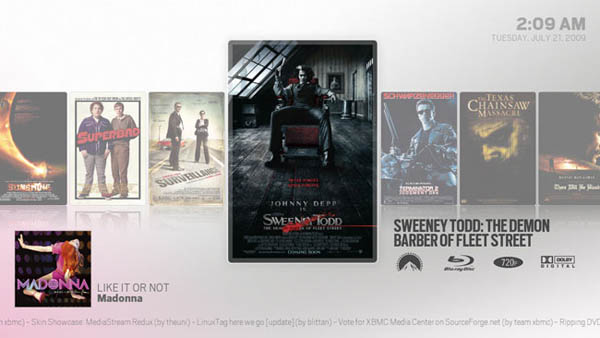 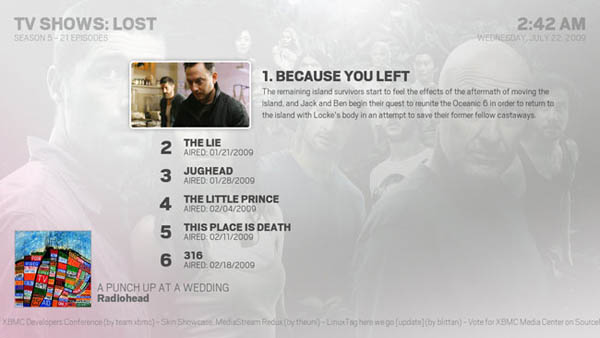 This is the new default skin for the new version of XBMC and is a huge improvement on the old default skin. It’s simple and stylish and has all the core features you need. 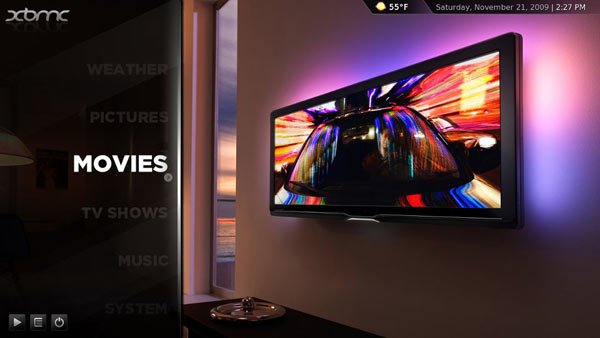 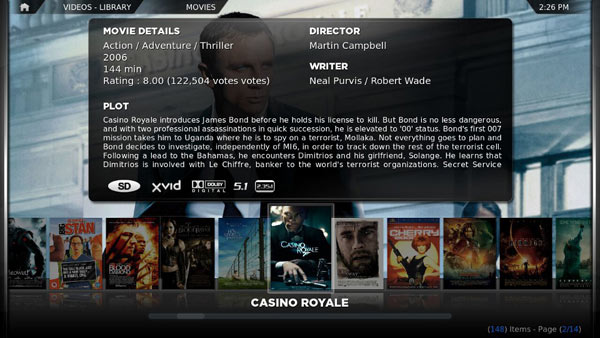 Using your iPhone as a remote with the XBMC iPhone app

If you have an iPhone or an iPod touch you can download an app that lets you control XBMC via your iPhone/iPod. There are a handful of XBMC remote apps available including a few free ones that simply lets you navigate the menus like a regular remote control by clicking up down etc. on your iPhone. I prefer the XBMC Remote by Collect3 mobile. It costs US$3.99 or AU$4.99 but is by far the best and most complete XBMC app available. The cool thing about it is that it allows you to browse through your XBMC library on your iPhone and even check out all the cover art and synopsis info over WiFi without even seeing the TV. This allows you to quickly find what you want to see and play it without having to navigate through the XBMC menus on your TV. 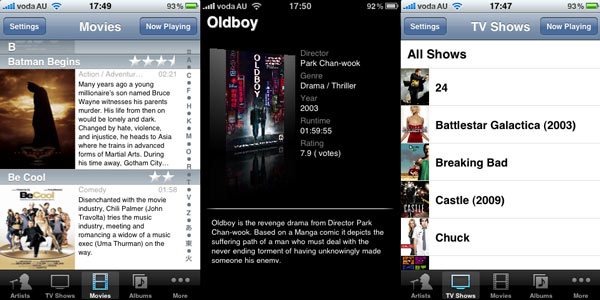 As great as XBMC is it may not be for everyone. It can be quite technical and fiddly to get everything working exactly the way you want and all options and customisation can be quite daunting to non-technical users. Some people may not even want all the differnet skins and options and prefer something working straight out of the box with minimal hassle (I have to admit I have felt that way myself several times when trying to get certain things working a specific way with XBMC). Some very good alternatives to XBMC are Plex and Boxee, both of which were developed from the XBMC source code.

Even though you can use XBMC on a Mac a good alternative for OS X users is Plex. Plex is an independent fork of the XBMC source code with some additional features added specifically for Mac. You’ll need an Intel based Mac running Leopard or Snow Leopard to run Plex. Some of the main goals of Plex is to make it much more accessible to the non-expert users and eventually make it feel like a native OS X app. 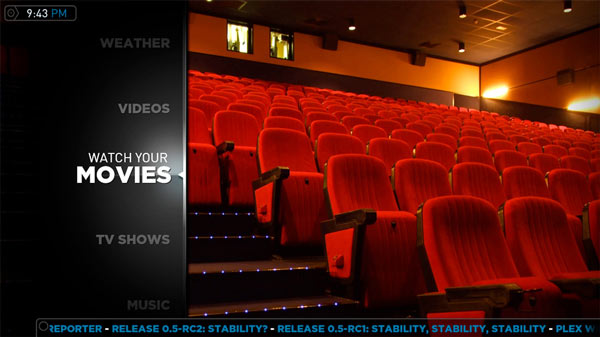 Plex has seen several big improvements with the release of Plex Media Server and currently working on a complete rewrite of the local files library. Going from using the XBMC Library code the Plex team decided to do a complete re-write to do everything the XBMC library was capable of and more. The new library system is de-coupled from the media center and is served out via an HTTP/XML from the Plex Media Server. It’s also more flexible, open, unified, robust and user friendly than the old library. One feature I was particularly intrigued by was the ability to create additional sections like “Documentaries” or “Anime” rather than being limited to Movies and TV-Shows. Hopefully this and some of the other cool Plex features will also make their way into XBMC at some stage. 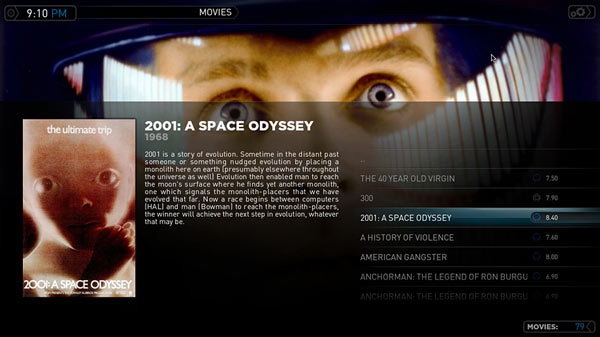 If I were to use dedicated Mac Mini with NAS attached I would definitely give Plex a try as it might outshine XMBC on the Mac. I might have to try out a Mac emulator or VMWare to try out the new version of Plex when it’s ready.

Boxee is another fork of the original XBMC source code and is now pretty much entirely re-written adding additional features for social interaction and sharing information between friends. Boxee also lets you interact with an impressive number of online services like Hulu or Pandora from within Boxee to provides you with even more ways to enjoy and discover media. Like XBMC Boxee will also scan and organise your media, find the relevant meta-data and cover art or posters. 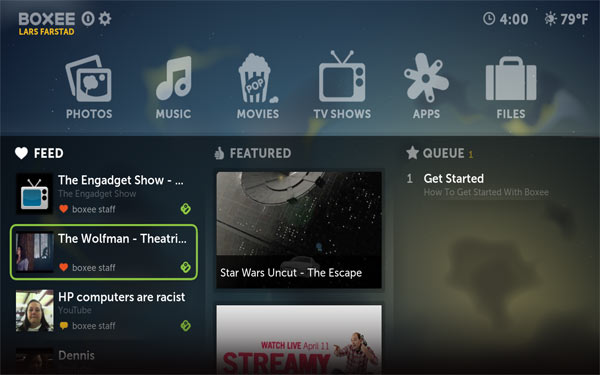 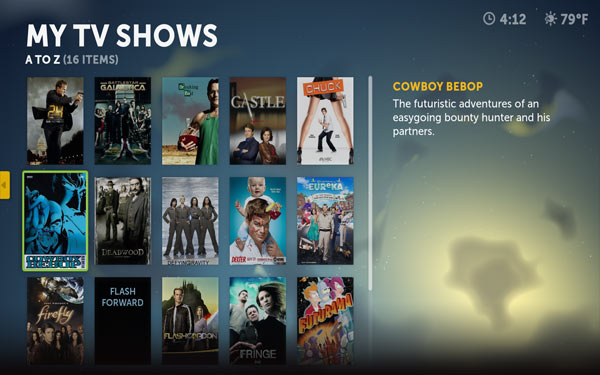 If you live outside of the US however a lot of these services won’t work unless you route your internet connection via a proxy server to appear like you’re in the US.

Boxee shares a very large part of the feature set with XBMC but also boasts a significant arsenal of its own. Boxee is particularly strong when it comes to social interaction and sharing information on shows across a number of different social networks. It includes recommedations from both friends as well as “featured” media to allow you to discover more intersting or just random stuff. One feature I found particularly useful was the “add to queue” ability that allows you to queue up the media you want to watch. At the time of writing Boxee is still in Beta and I’m sure there will be further improvements and perhaps new features even after the full released. One feature that is not yet available in Beta is the ability to manually correct shows or movies that have been incorrectly identified by the automatic scan. 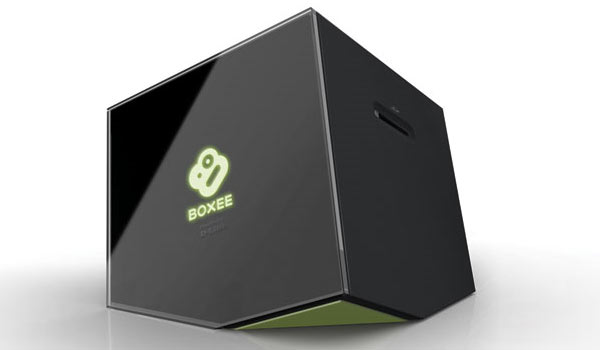 Since receiving an injection of venture capital the development of Boxee has really heated up. It’s much more stable, easier to use and a number of rather unique and clever features. There’s now even a dedicated hardware Boxee Box available produced by D-Link. Overall Boxee is quite a bit easier to install and get working for the average user. The installation is very straightforward with a basic settings option when you first start Boxee. There’s alos an introduction video explaining the basics and additional video tutorials available.

The trade-off is that you have less control over the look and feel and stuck with the default user interface (for now). In my opinion the Boxee interface is not as slick, cool and sophisticated as the ones you can get with XBMC, however it is definitely functional and perhaps more family friendly with bigger text and rounded corners. If I had the option of using a skin similar to Aeon, MediaStream or even Alaska with Boxee I would consider swapping to Boxeee.

Well boys and girls, there you have it…you should now know the basics for building your own HTPC. I’ve started saving for mine and am aiming to have it up and running in May sometime after my birthday. Hey, I’ve waited this long, I’m sure I can wait a few months longer. In the meantime I’m getting my media collection organised.